US Ambassador visits places in Bhopal 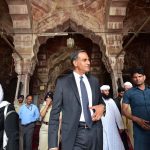 Bhopal: US Ambassador in India Richard R Verma met Chief Minister Shivraj Singh Chouhan here on Wednesday. Verma held discussions on issues like economic investment, women’s empowerment and religious freedom in Madhya Pradesh. The Chief Minister welcomed Verma and members of embassy accompanying him. Chouhan informed that till a decade ago, Madhya Pradesh was among backward states of India. Now, the state is maintaining growth rate in double digit and probably the highest agriculture growth rate in the world.

The Chief Minister informed Richard Verma that unprecedented water conservation works have been undertaken in Madhya Pradesh. Now, a target has been set to irrigate 60 lakh hectares. Availability of water has increased due to maintenance of small and big water structures and conservation of water.

Discussing community participation-based development, Chouhan said that government and people work in tandem in the state. Referring to recently concluded Simhastha at Ujjain, the Chief Minister informed that due to cooperation of people 8 crore devotees visited Ujjain. He informed that a campaign will be launched with public cooperation to rejuvenate rivers. Rivers like Narmada do not draw water from glaciers and only vegetation is their source of life. Therefore, it has been decided that large number of saplings will be planted within one kilometer radius of both the banks of Narmada with people’s cooperation. Farmers have been urged to plant saplings of fruit-bearing trees. They will be given compensation till these trees start bearing fruits.

The Chief Minister informed Verma that simultaneously with Simhastha, a series of ideological seminars was held on global issues like climate change, global warming and religion for human welfare and value-based life. The series concluded with international Vichar Kumbh during Simhastha. Chouhan informed that economic prosperity is necessary, but there are other norms also for happiness. Keeping this in view, a Happiness Ministry is being constituted.

Referring to economic investment in the state, the Chief Minister informed that Global Investors Summit will be held at Indore on October 21, 22 and 23, 2016. Invitations are being sent to American investors. Chouhan said that India and US have ideological similarities on several issues like climate change and terrorism. He said that Indo-US ties have strengthened further. Chouhan urged for participation of US as partner of Global Investors Summit.

Richard said that Indo-US ties have been cemented. Both countries wish to move ahead jointly in every sector. Lauding economic and social sector development in Madhya Pradesh, he said that there are immense possibilities to work jointly in clean and green energy sector. The Chief Minister informed that world’s biggest ultra mega solar power plant of 750 MW capacity is being set up at Rewa. Asia’s biggest 135 MW solar energy plant has already been set up in Neemuch. Rewa’s plant would start functioning in next two years.

Richard apprised himself of state government’s strategies for simplification of processes for business and industry. The Chief Minister informed him that single-window system has been implemented for immediate land allotment, inspection of factories and completion of administrative formalities. He said that this has further increased investors’ trust in the state government since they have got considerable help in setting up their projects.

Referring to state government’s initiative on climate change issue, the Chief Minister informed that special attention has been paid to sustainable use of natural resources and promotion of organic farming. The government wishes to make Madhya Pradesh an ideal state for efforts to overcome climate change.

Discussing efforts for women’s empowerment, Chouhan informed that gender ratio in Madhya Pradesh is improving now. Mindset towards birth of girls has changed. The state government has made all arrangements for girls education, marriage etc. Women have been given 50 percent reservation in local bodies. Schemes like Ladli Laxmi have supported poor families. Percentage of institutional delivery has increased from 22 to 82 percent. Madhya Pradesh is the pioneer state in the country to undertake maximum women’s empowerment initiatives.

Discussing issue of religious freedom, the Chief Minister informed that festivals of all religions are celebrated at CM House. People of all religions and sects co-exist peacefully and are continuously carrying forward traditions of social harmony. He informed that Muslim community opened their houses and gave shelter to devotees in mosques when storm had suddenly struck Ujjain during Simhastha. Richard lauded cultural diversity and communal harmony in the state.