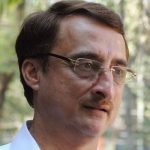 Bhopal: Former additional solicitor general and Congress candidate for Rajya Sabha Vivek Tankha on Monday filed his nomination for the biennial election to the Upper House from Madhya Pradesh. He filed the papers before Returning Officer Bhagwandev Israni in the Vidhan Sabha premises here. State Congress President Arun Yadav, Congress General Secretary Digvijay Singh, parliamentarian Jyotiraditya Scindia, Congress legislators and other senior leaders were present. Soon after filing the nomination, Tankha responding to a media query exuded confidence of his election to the Rajya Sabha as he possessed sufficient numbers. He asserted that the BJP would suffer defeat if it fielded a candidate against him.

Of the eleven Rajya Sabha seats in Madhya Pradesh, the term of three parliamentarians Anil Madhav Dave, Chandan Mitra (both from Bharatiya Janata Party) and Vijaylaxmi Sadhu (of Congress) is ending shortly. The notification for the biennial election was issued on May 24. The last date for filing nomination is May 31. Scrutiny will be held on June 1 while names could be withdrawn till June 3. Polling will be held if necessary on June 11.

In proportion to the number of their respective members in the 230-member Vidhan Sabha, the BJP will get two seats while the Congress would get one. The BJP has already announced the name of Mr Dave as its candidate. A decision on the name of another name is likely soon.

Speaking about then Barwani Collector Ajay Gangwar’s transfer after he posted comments praising the country’s first premier Pundit Jawaharlal Nehru, Tankha said that taking action against the Indian Administrative Service Officer concerned for exercising his right to freedom of expression is inappropriate.

In response to another query, Tankha said that the Supreme Court is hearing the case of Madhya Pradesh Professional Examination Board scam. He said that the Congress would raise the issue more vigorously in future.