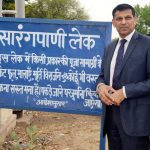 Bhopal: Governor of Reserve Bank of India Raghuram Rajan met Chief Minister Shivraj Singh Chouhan here on Friday. Chouhan said that states’ rating should be done on the basis of their financial condition. States with good financial condition should be encouraged. RBI Governor Rajan praised continuous impressive economic growth rate of Madhya Pradesh. He said that financial literacy should be included in school syllabus. Chief Secretary Anthony DeSa was also present on the occasion. The Chief Minister said that investment in all sectors is increasing in the state. Mukhyamantri Yuva Udyami Yojana has been implemented to promote young entrepreneurs. Under this scheme, the state government gives loan guarantee. A roadmap has been chalked out in the state to double farmers’ income in 5 years. An ideological Mahakumbh is being held to give global message for human welfare.
He said that banks should make efforts to ensure that credit-deposit ratio of the state increases constantly. Cash availability in banks should be increased so that farmers can be paid amount against wheat procurement within 7 days. Refinancing from NABARD should be increased to 50 percent. It will benefit farmers. investment of SLR should be made in phases in government bonds by District Cooperative Central Banks. There should be no difference between interest rate on food grains credit limit being provided by RBI to Food Corporation of India and the state government. Under various schemes, payments should be made to beneficiaries in villages itself.
CM informed that in the state, widespread arrangements have been made to deal with drought. Special efforts are being made for smooth drinking water supply in rural area. Special Gram Sabhas will be held to increase financial literacy and awareness.
RBI Governor said that a special campaign should be conducted to increase financial literacy among farmers and students. It should be included in school syllabus. Its draft is being prepared. Help will be extended to banks to increase recoveries. Banking correspondents system will be strengthened. Attention would be paid to training and certification. After expansion of payment bank and mobile banking, status of payments under various schemes in villages will improve. District Cooperative Banks’ functioning should be streamlined further. Necessary infrastructure should be made available to micro, small and medium enterprises.
The Chief Minister presented a book focusing on Simhastha and another book on scheme to double farmers’ income to the RBI Governor. ACS Finance AP Shrivastava, RBI’s Regional Director Ajay Michhiyari, Principal Secretaries to CM Iqbal Singh Bains and SK Mishra, Commissioner Industries VL Kanta Rao and Principal Secretary Cooperatives Ajit Kesari were also present on the occasion.