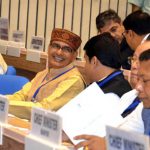 New Delhi: Expressing concerning over cases pending in courts, Chief Minister Shivraj Singh Chouhan appealed to fill vacancies of judges at the earliest. He said that judicial services in Madhya Pradesh have been strengthened for early and easy justice to common people. Chouhan was addressing a convention of Chief Ministers and High Courts’ Chief Justices in New Delhi today. Prime Minister Narendra Modi, Union Law Minister Sadanand Gouda and Chief Justice of India TS Thakur were also present on the occasion. The Chief Minister suggested that such arrangements should be made that along with general appointments of judges by states’ High Courts in proportion of pending cases’ number, every state should also be allowed to increase number of judicial service posts and develop proportionate infrastructure after making factual assessment. Chouhan supported the issues raised during point-wise discussions with CJI Thakur and gave suggestions for judicial reforms and timely justice.
The Chief Minister informed that the state government is committed to ensuring prompt administration of justice to people. To strengthen judicial service, number of judicial officers has been increased. In-principle consent has been given for creation of 231 posts of judicial service and 325 posts of civil judge. Along with technical posts for High Court’s subordinate courts, administration and non-administrative sectors have also been strengthened. New court buildings are being constructed at Indore, Rewa and Jabalpur. Proposals have also been sent for construction, maintenance of judicial officers’ residences and multi-storey condominium constructions. Juvenile courts have been set up in all districts and teams under district magistrates have been formed. These teams ensure that no child suffers injustice. Children are also being provided facilities of food, education, health etc. Chouhan urged to make it statutory
Chouhan informed that Madhya Pradesh High Court is functioning efficiently. All its judicial work has been computerized and Babu Raj has been abolished. Litigants can see progress of pending cases through judicial portal. This has brought transparency in judicial system and accelerated pace of work.