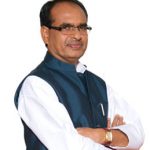 Chouhan stated this at Bharat Mata Samanvay Mandir on Badnagar road at Ujjain today. He sought blessings of Mahamandaleshwar Satyamitranand Giri Maharaj. Chouhan’s wife Sadhana Singh was also present on the occasion. During discussions with Satyamitranand Giri Maharaj, Chouhan informed that temples at Ujjain have been renovated and special attention has been paid to devotees’ convenience. Satyamitranand Giri Maharaj said that the state government has ensured excellent arrangements for Simhastha. He lauded works undertaken by the state government. He invited Chouhan to visit Bharat Mata Mandir again.
After Shahi Snan, Chouhan visited Ujjain for the second time. He inspected preparations at the venue of ideological Kumbh to be held during Simhastha at village Ninaura. Chouhan said that the Kumbh will spread message of peace in entire world. Prime Minister Narendra Modi will dedicate conclusions of the Kumbh to the world. MP Dr Chintamani Malviya, MLA Anil Firojiya and Iqbal Singh Gandhi were also present on the occasion.
The Chief Minister said that ideological Mahakumbh focusing on moral values is being held in the state after many centuries. Traditional Kumbhs are held in 30 to 40 days, but, holding ideological Kumbh is significant. At the Kumbh, saints and seers will give message of peace to the world. There are many current issues, which merit immediate necessary action. Most important of these is leading a life based on moral values. Besides, issues pertaining to agriculture, science and spiritualism, women’s empowerment also need immediate attention. It is need of the hour for brainstorming on these issues and come out with conclusions which can be followed by entire world.