Shampa Shah has authority in sculptures 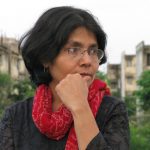 Internationally acclaimed sculpturist Shampa Shah has said that the artwork on display creates a sense of identity to communities. The exhibition has two important functions, first, to spread awareness about the declining traditions of people who are unaware about India’s diversified cultures. Second, to create a sense of pride and identity among people who are from the same community as the artists.
She has been associated with the Indira Gandhi National Museum of Man since 2012. Shampa feels that that the exhibition is formed from an idea to visualize myths and beliefs of several communities and then portray them through artwork. A unique style of artwork is inherent in every community, she said. The objects included clay works, paintings, terra cotta, iron mural and sculptural forms.
“One of my favourite artwork is of the Agaria tribe. It is an iron mural which depicts people nailing the earth to keep it still. According to the legend, when the earth was created it was wobbly so the community believes that it had to be nailed to keep it still. Another artwork that I like is the clay sculpture based on the story of the Narmada river,” she added, while detailing about her exhibition in Anugunj of the museum in Bhopal.
Near the entrance of the exhibition there is a picture of a granary created by artists from the Gond community. According to the myth, a deity, whom they worship, created land on a spider web at a time when the earth was only covered with water.