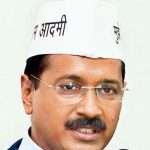 Bhopal: Delhi Chief Minister Arvind Kejriwal highlighting achievements of his government in Delhi, speaking to the citizens of Madhya Pradesh over phone. Counting few of the achievements like coming up with clinics in each ward, where people are getting round the clock treatment and free of cost medicines, new systems introduced in taxis, roads and traffic and adequate compensation to the farmers in case of damage to crops. After giving complete information, Kejriwal disconnects the call saying that he simply wanted to give information as what his government is doing for Delhiites.
In past few days, a number of people in Bhopal have received similar phone calls, getting information about the Kejriwal government’s achievements in Delhi State. Besides making phone calls to the citizens here, Kejriwal is also interested in circulating his government’s achievements in Delhi, among the people of Madhya Pradesh by giving full page advertisements to different newspapers.
Sources said that establishing polyclinic was the dream project of former chief minister Sheila Dikshit and a provision of Rs 5 crore was made for each polyclinic. However, the present Delhi government has established clinics in each ward with a cost of Rs 30 lakh only. Political observers feel that Kejriwal is eying the next assembly elections scheduled in 2018. Since, the main opposition in the State assembly, Congress is still nowhere in competition due to infighting among its leaders, Aam Admi Party (AAP) is trying to fill the vacuum.
This is evident with the agitations launched by the AAP on different issues in the State in recent past. With these agitations that continue for past one month have certainly felt their presence, they added.