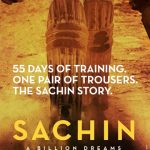 After the official teaser of A Billion Dreams is out on April 14, people are eagerly waiting for the movie to come out. Sachin Tendulkar, the legendary batsman who is regarded as the God of cricket, will be back very soon to mesmerize his fans once again. However, not on the cricket field but in your nearest theaters since a movie is being made on his life story! Sachin’s official teaser is recently out and it looks so promising that you’ll find it difficult to actually wait for the movie to release. Everyone can learn a lot from Sachin’s life as he is a great example of how to live life with discipline, dedication and focus on your goal. At a very young age, he entered the cricket field and stunned all and sundry with his technique, attitude, determination to succeed and awe-inspiring performance!
Apart from following the phenomenal rise of Sachin, the film will also reveal a few never-seen-before aspects of his life. Incidentally, the makers wanted to capture the glorious years of the Indian legend for the next generation. However, they were not interested in making a biopic, so they zeroed in on the idea of making a feature film after getting Sachin’s consent.