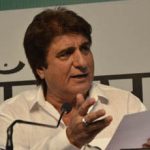 Bhopal: Taking a dig at the grand celebrations of completion of two years of the Narendra Modi government at the Centre, actor-turned-politician and Congress spokesman Raj Babbar today said there should be a limit of celebration in democracy even after two years of bad governance. This National Democratic Alliance regime, led by the Bharatiya Janata Party, came to power with umpteen promises and after two years, their all pre-election promises proved to be hollow. Still they are publishing 4-G like advertisements in the newspapers and in other sources, Babbar told media persons here at State Congress office.
Raising various issues such as the Modi government’s failure to tackle drought situation, wiping out tear from farmers’ eyes, controlling of price of essential commodities such as pulses and fuel prices, the Congress leader said Modi promised to give jobs to two crore youths but in two years it gave jobs to only 1.34 lakh. Citing examples of plight of farmers in Madhya Pradesh’s Neemuch, Babbar said the peasants were selling onions at a throwaway price while in Maharashtra’s Latur ryots were profiting only Re one after selling ten tons of onions and production of foodgrains had come down to 25 per cent. He also alleged that labourers were getting less days of work in the Mahatama Gandhi National Employment Guarantee Scheme.
Babbar also criticised the Madhya Pradesh regime’s action against the Collector of Barwani for praising India’s first Prime Minister Jawaharlal Nehru in the social site Facebook. This is an ample proof of the style of the work of the BJP governments at the state as well as the Centre, he pointed out. Regarding Vyapam scam, Babbar said that despite taking place of such a huge scam, the state government downplayed it and projected it a small one while law and order situation was deteriorating day by day in the state.
About passing of Goods and Services Tax (GST) Bill, Babbar said that the BJP was blaming the Congress but the party would not allow it to pass until all provisions set by the Congress are incorporated into it. Even the BJP’s ideological guide RSS is skeptical about the future of GST if it is passed in the present form, he said while adding that the Congress wanted that the tax limit in GST should be within 18 per cent. To query about Priyanka Gandhi’s entry into politics, Babbar said, Each and every Congress man wants that she should come to politics. But the decision in this regard would take by the family members.