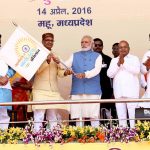 Bhopal: Eying the forthcoming Uttar Pradesh assembly elections, the Bharatiya Janata Party (BJP) is focusing on its dalit agenda claiming Bhimrao Ambedkar’s legacy. While talking to media persons on Wednesday, Chief Minister Shivraj Singh Chouhan had stated that Congress has no right to speak out about Bhimrao Ambedkar, as it is only the BJP that always remembered him. He also did not forget to mention that it is only him who constructed a memorial at Mhow and provided facilities to the devotees in Mhow.
On similar tunes, Prime Minister Narendra Modi on Thursday reminded Congress of repenting for undermining Ambedkar’s legacy for 60 years as he reached out to dalits, saying he is working to fulfill the vision of the dalit icon. He was addressing a gathering in Mhow on Thursday.
Modi, who had faced attack from Congress for trying to appropriate national icons, hit back asking why the successive governments of Congress did not develop the five places associated with Ambedkar during their tenure.
Listing a number of measures that his government is taking to carry forward the vision of Ambedkar including on maritime projects and the empowerment of weaker sections, Modi said, “For so many years, the vision of Ambedkar was undermined. Some persons are distressed why Modi is doing all this. This is a matter of our dedication and conviction. We believe that social harmony can be achieved only by following the path shown by Baba Saheb. I feel proud to work at the feet of Baba Saheb.”
Referring once again to his humble origins, Modi said that if the son of a woman, who used to fetch water in others’ houses could become Prime Minister, the credit for it goes to Ambedkar. On his government’s decision to construct a memorial at 26 Alipur Road in Delhi, which was the last home of Ambedkar, the Prime Minister asked as why the Congress did not do so in the last six decades.